You are here: Home / St. Francis and Franciscan Spirituality

Who is St. Francis of Assisi! 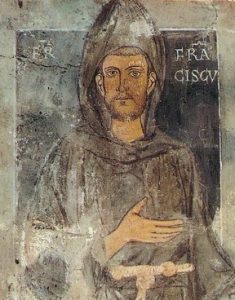 The oldest surviving depiction of Saint Francis is a fresco near the entrance of the Benedictine abbey of Subiaco, painted between March 1228 and March 1229. He is depicted without the stigmata, but the image is a religious image and not a portrait

Giovanni di Pietro di Bernardon (nicknamed by his father “Francesco” after his business travels in France) was born in Assisi, Italy in 1182.  He was a free-spirited youth, seeking glory and amusement.  He wanted to become a valiant knight; but he was captured and thrown into prison where he became very ill.  The temporal isolation afforded him the time to examine his actions, his values and the vanities he once prized.  He experienced a deep spiritual conversion and sought a new life in imitation of Christ.

Francis immersed himself in his new undertaking.  Townspeople mocked him and thought he was mad.  His own father, a wealthy fabric merchant, called him to court over bolts of expensive fabrics that Francis had taken and sold to benefit the poor.  In front of the entire town, Francis returned everything to his father, including the very garments he wore.  He denounced his family ties and left Assisi.

He began a new life as a working beggar, honing the virtues of charity, detachment, and simplicity.  Each day, he shared more deeply in the very life of Christ.  Holy Mass, the Blessed Sacrament, and prayer were his true daily bread.  As Francis travelled the countryside begging, praying, preaching, and working; people no longer laughed but actually sought him out.  His prayers brought them relief from distress and illness.  He spoke of the lasting peace of Christ in the soul and many followers began to accompany him.

To those with famlies, he gave a special Rule a new “secular” way of life.  Challenges and cares of family life were to become stepping stones (not barriers) to their new life in Christ.  By living the beautiful Rule and spirity of St. Francis, many of these lay Franciscans attained humility, joy, and a holiness they had not previously found.